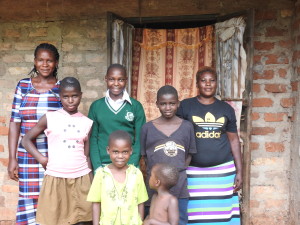 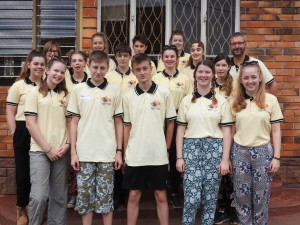 Flicking through the October 2017 diary…

The fourteen Testbourne students settled well and spent three + days at Mityana Secondary School.  They had some new experiences, including how to carry 20 litres of water from down at the water hole up to the school in the heat of the afternoon.  It’s about a mile and a half and was quite a challenge.

Part of each day was spent in class with their buddies and touring the school. During the course of their time at Mityana Secondary School they spent time finding out about their buddy’s daily routine, family, challenges and vice versa, writing down answers to questions which they asked each other. It is amazing how quickly they were able to really get to know each other. They had a lesson in agriculture, amongst other subjects, including chemistry, maths and East African history. Our two staff had a go at teaching their subjects to some Mityana Secondary School students.

Their time began with a visit to the disabled children’s hospital, doing arts and crafts and sitting alongside children whose limbs are being repaid slowly and often very painfully. It was a steep learning curve for them. But they were brilliant.

On the Sunday they were at the cathedral for the school’s main service which started at 8 am! They all spent a day in a primary school, the Overton kids went to Kibubula, the Whitchurch group went to Mityana Junior. At each school they told traditional stories, played games, did some art and craft activities.

They also visited the Deaf School, they spent some time at the Kindergarten and went to a vocational school.  This enabled them to see both sides of primary and secondary education. They were particularly taken by the little ones, playing with balloons and bubbles and then finishing with the hokey cokey – so much fun.

Here are some reflections from the kids:

“I learnt a lot from the experience – about different cultures, different perspectives on life, how much I hate water-carrying, how lucky I am and how much I take for granted every day (just the fact that I’m writing this on a computer proves that!). It is a completely different world there – people have so little, have less opportunities, but they seem so much happier and willing to work despite the many boundaries they will face. I have never before looked at my hand and thought, this makes me the odd one out. When I first got back, I looked at everything around me, and I had so much more than I ever realised – a house made of sturdy materials, a steady supply of money, food and clean water, technology such as the computer I’m writing this on, nice toilets (anything that has a seat and is clean in an insect-free room that doesn’t reek) and those are just the things we consider to be necessities. Even balloons – things we see every time it’s someone’s birthday – I seriously doubt any of the children at the kindergarten or even the children’s hospital had actually had a balloon before. They might have known what they were, but they had never had the chance to simply have a balloon. If only you could see their face when they were playing together – there was no ‘that’s my balloon’ or ‘give it back’, just a general sharing of what they had without thinking. The same occurred when we helped some children make beanbags at the primary school. We went outside to play with them, and no-one minded the fact that throwing them at other people meant that you probably wouldn’t get your one back, it was enough just to throw one, then find another to throw.”

“English and Ugandan cultures are completely different. I assume you probably know a fair bit about English culture – a quick welcome may be said when you enter a restaurant or a house for the first time, but in Uganda you are thoroughly welcomed whenever you enter a building. Trust me, you actually can’t enter a place without being greeted and then instantly told you are most welcome before continuing. But that’s not all. Eventually, you will be fed. And not just with whatever everyone else there eats, but with what is acceptable to give to visitors – and lots of it. You can go to someone’s house, and they will feed you whatever they have – the best water, as much food as they can give, and the nicest food. It says a lot about the people of Uganda – they want to make you feel comfortable, not to be hungry, and to make sure you feel at home. They will make sure there is nothing they can offer you to make you feel welcome that they haven’t already, and then they might offer it anyway. And it works. You never feel unwelcome, you never feel uncomfortable, and you never feel hungry for long.”

“The visit to Uganda was probably the best trip I’ve been on. I loved every part of it. Visiting Mityana secondary was fantastic. My buddy was the nicest person I’ve met, he was so kind and welcoming. But saying that so was everyone in Uganda. Everyone spoke to you and was so kind. Pupils at the school were very nice too and just wanted to talk to you and find out about you. It was very eye opening too as we saw what their school was like. The hostels were very sad to see as they were appalling to even be in never mind live in.

Visiting places like Namutamba and St. Mary’s school for the deaf showed me that you don’t need a lot to be happy even though at Namutamba, people had gone through so much and they had pins in their legs however they were still smiley and happy. Even though they couldn’t hear or speak to you, you could see how happy the children were at St Mary’s by just getting an education. Also, they condition of the dormitories were awful. I still can’t believe they live like that. The mosquito nets had holes in them, the beds were three bunks high, rusty and falling apart.

What I learnt about myself is that I do not need a lot to live a good life and I take far too many things for granted. I can be self-dependant and look after myself a lot better than I thought I could. Also, I tried more foods than I thought (matoke) but I didn’t like it but a least I tried it.

I learnt that Uganda is great country which far too little people know about. The people are so welcoming and appreciate you being there. However, the poverty needs to be stopped out as there are a lot of people without basic needs like clean water.”

“I have wanted to be a part of Team Uganda since primary school and this year I finally got the chance! It has been such a great experience with all the fundraising, team building and, of course, the trip itself. During our time out there, we saw a lot of Uganda and got an idea of the differences and similarities in our lives.

Our visit to the Kindergarten taught me how much we take for granted when we are young – none of the kids had done painting before and they had never seen a balloon! Going to Mityana Junior School was very special for me as it was what started my desire to go to Uganda; my favourite part of the day was when we planted some mango trees as it was really cool to think that they will still be growing in 20 years as a memory of our visit.

Going on this trip helped me to realise the hardships faced by some people and how your life can interlink with others despite being over 2,000 miles (or more) away. I learnt that you don’t need much to be happy and whatever you may have, be extremely grateful for it. A key thing that I saw is how much they value their family despite some students only seeing their parents 3 times a year, as they are full time boarders at school. It also taught me to take every opportunity I can, as you never know when something may go wrong and you should grow up with no regrets.” 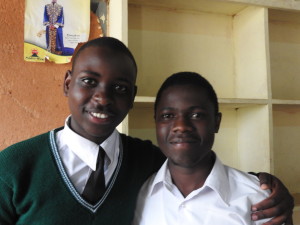